How I Knew He Was Going to Die 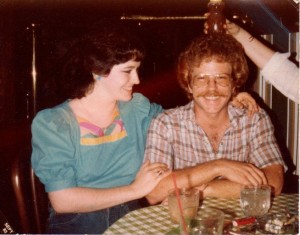 It was PTSD. Except they didn’t call it that back then. They called it “postpartum depression.” With some other “postpartum” problems thrown in. In the 25+ years that have followed, I’ve learned to understand it better, but at the time, all I knew, all my family knew, was that I was very sick.

The baby was 13 months old, and I was feeling a little better. I had weaned myself off of anti-depressants (too soon) a few months earlier, and I had started to dream again and remember my dreams just a few weeks prior.

The return of my dreams was important. And an angel took advantage of my newly-reopened mind to bring me some Big Messages.

In my vision dream, which I now call “my angel dream”, I stepped into (from where?) something like a room, except the walls and the floor had no substance. They were white, sort of like clouds, but solid. They seemed to be made of a soft light that you could walk on. And there was no floating mist, just this soothing whiteness.

A feminine figure approached me from straight ahead. She had dark hair and seemed to be clothed in the same light-material of the walls and floor. She was kind and told me everything was going to be all right. Then, she asked if I would like to see a picture of my family. I eagerly nodded.

Hanging on this non-substance wall was a large, gilt-framed portrait. It featured a slightly-older version of me, sitting in a wingback chair and sporting a Gibson-girl hairdo. There were three daughters in the portrait with me. Maddie, the one who was a baby when I had this dream, appeared to be 9-12 years old. She was standing just behind my left shoulder. A second child appeared to be about 5-8 years old. She was blonde, like Maddie, and stood at my left knee. The third looked to be 4-7 years old, also blonde, and I thought she and the second child might be twins, or they were at least less than two years apart. She stood in front of me. All blonde, all looked alike, and they were clearly my daughters. My husband, Tim, was not in the portrait.

That’s most of what I remember about the dream. Back then, I didn’t know I was psychic, and I didn’t know how to “feel around psychically,” like I do now, asking questions of Source and receiving the answers in various ways.

What I remember most strongly was calling my best friend and saying, “Dude. I think I’m going to be a young widow.” I didn’t know how I knew–it wasn’t just that Tim wasn’t in the portrait. It was a feeling I had, a knowing. I just knew.

And somehow, I knew it would be when Maddie was seven years old. Why seven? Why was this based on HER age and not my husband’s–or mine? These are questions I still do not have answers to.

And what in the world would my husband die of at age 42? The first thought in my head (remember, I didn’t know then about the first thought being the answer) was that it would be a heart attack. But he was going to be only 42 years old! He was healthy! I didn’t think a heart attack was probable or even possible.

I decided, all logicky, that it had to be a car wreck. An image appeared in my mind of his car on the side of I-35 between Austin, where we lived, and San Antonio, where he did indeed die of a heart attack. At age 42, when Maddie was 7.

I had had premonitions before, many times. For example, I knew when I met Tim that I would marry him. But that seems like something a lot of people experience, doesn’t it?

And what about the three daughters? I only have two, as it turned out. Two who made it here alive–there was one in between that I miscarried, and that baby would have been born 11 months before the one who is now my younger daughter, almost like twins…

When Tim turned 40, I made him get a physical, although he was very rarely sick and felt good. The doctor said what you’d expect: Lose some weight, cut back on the stress, stop smoking, get some exercise. His cholesterol and blood pressure were kind of high.

I lived with this premonition for six years. When Maddie turned 7, I prayed for more time. And maybe I got it–it was six months after her birthday that Tim died. And we got to have some really good last months together, including a trip to Disney World for the family, a gift from Tim’s parents.

The day Tim died, he was packing up and leaving for San Antonio, where he was supposed to teach a class. I was starting to come down with a cold, so I went and kissed him and he just gave me a peck. “Is that all?” I asked, annoyed. “Well, I don’t want to catch whatever you’ve got,” Tim replied. Oh, okay, fair enough.

Standing on the driveway, holding our younger one, waving good-bye, and watching his car disappear down the street, a thought flashed across my mind. “That’s the last time I will see him alive.” I dismissed the thought as that of a worrying wife.

I don’t remember ever asking “WHY?” about Tim’s death. Plenty of grief, yes, oceans of tears, but no questioning. Because I knew it was his destiny–and mine and that of our family. I had been told in a most reassuring way, and I trusted that everything would be all right.

(See my video telling what happened right after Tim died and again after my grandmother died.)