Flying without a Plane – or a Body 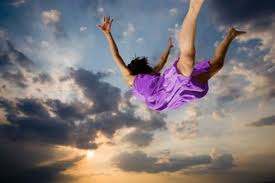 I have read only a couple of things about astral projection, also known as astral travel, out-of-body experiences, and transcendental meditation. What I have read did not satisfy me with regard to my personal experiences. Thus, I want to share with you those experiences, in the hopes that you will find it helpful.

Some people believe that everyone’s soul travels out of his/her body during sleep. I disagree, mostly because I know the difference between astral travel and dreaming. Someone once told me that if you dream you are flying, your soul has left your body. That may actually be possible, but again, it is not my experience with being out of my physical body.

When I was in my early teens, I experienced my first out-of-body travel. I was lying on the couch, resting with my eyes closed but not asleep. Suddenly, I was also across the room, next to the fireplace. I was aware of both my physical body and my consciousness, even though they were separate. Then my soul went back to my body and was lying back down. In the process, as my soul-head was still above my physical head, I opened my physical eyes. And I could see from both perspectives! It was a very odd sensation and I admit I was not altogether happy about it.

I knew this was not something to discuss with others. How? Well, maybe you’ve read some of my stuff about how I finally gave in to a disbelief in magic. I was trying to be a “mere mortal” at that point, so I didn’t accept magical things anymore. Or I tried not to. This one was pretty overwhelming. I had no idea until I was about 40 that these spontaneous out-of-body experiences might have indicated that I was psychically and spiritually gifted.

They continued to happen periodically throughout my teens. The second experience happened while I was sleeping at night. I left my body and shot down through the floor into the living room below. Another odd feeling that left me wondering what was going on. I didn’t encounter anyone else in the non-physical and didn’t want to ask anyone about it in the physical.

Eventually, I learned to have a little bit of control over this process. I couldn’t make it happen, but I could sometimes guide it if it did. Once, I went to see the boy I liked in high school. I simply concentrated on his name-like, “I want to go see X”-and there I was in his bedroom. He was asleep and I could see exactly where the furniture was and the position he slept in. The next day, I asked him how he slept. He showed me and it matched what I had seen with my soul-eyes.

Years later, I focused on someone in particular again. This was on a Sunday afternoon. I sensed vast amounts of water under me, for the brief moment I was “traveling”. Then I was in front of my friend. He was at a resort, a large hotel on a beach. The hotel was distinctive, with two separate buildings that curved toward the ocean. There were terraces from the hotel going down to the beach. I tried to talk to my friend, asking, “Can you see me? Can you hear me?” I thought my friend answered, “Almost.”

I’ll interject here that a disembodied soul in this physical dimension “feels” a little funny. There aren’t really eyes to see, ears to hear, skin to feel. But you “sense” things in a different way. So when I say that I saw or said something, think of it as being rather ghostly, non-physical, or angelic.

A few days later, I talked to the friend I had “visited” for the first time in a while. I asked what he had been up to and he said he just got back from Grand Cayman. I got excited about the prospect that I could prove I had been there in spirit! It just so happened that my next-door neighbor at the time had lived in Grand Cayman for a while. I described the hotel to her and asked her if she recognized it. She said, “Oh, yes, that’s the _____ Hotel in Grand Cayman. I am very familiar with it.”

Still, I didn’t tell anyone what had actually happened, but I had proved to myself that I really had done what I thought I had done!

Many years later, when I began teaching spirituality seminars, I began to talk openly about these experiences. At the first seminar, a woman in the audience raised her hand and said, “I do that too.” Then a young man in the back gingerly raised his hand. “I am so glad to know what that is,” he confessed with relief. “I didn’t know what was happening and I was scared.”

I explained to him three very important things: 1) It’s only your soul going around without your body, 2) nothing in the non-physical can hurt you in the physical, and 3) you have more control over it than you think you do.

I have finally learned about this control factor. If I start leaving my body, I can say, “I want to go to _____” and I will go to that place or that person, no matter where it or he or she is. I can also decide not to go at all. I have occasionally encountered other spirit-seeming entities who look like people but seem to be in the non-physical as I am. I cannot easily communicate with them, though, so I can’t say for sure. Thought is usually more effective than trying to speak words, but I still haven’t achieved communication with either physical or non-physical beings when I am astral traveling.

Sometimes, the experiences will meld with dream-like situations, which I can mostly control by choice, deciding what I want to have happen. If there is ever anything that seems frightening-and that doesn’t really happen to me anymore-I have learned that these things are manifestations of my own fear. This is key in your waking physical life, as well: If you sense something that frightens you, speak to it in love. Demons, gargoyles, and other scary things are only your fear appearing to you, reflecting back at you. Use words or thoughts of love, such as “I love you,” “I love,” “God loves you,” or “There is only love here.” And you will banish your demons.