A Myth Is as Good as a Mile 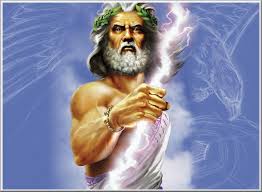 Warning: If you are religious, especially very Christian, you may find this offensive, blasphemic, and/or inflammatory. Proceed at your own peril.

Have you ever heard the expression “A myth is just a religion that no one believes in anymore”?

I’ve given it some thought. You know I am always seeking answers for you and for myself, right? And you know I’m not religious?  But I do believe and feel that there is something that creates and feeds us, Source, God, the Force, whatever you want to call it. I just don’t believe in the God of the Old Testament (and some of the New, although I dig Jesus for the most part), who is all judgy and wrathful.

Thus, here’s a little game I just came up with. (I’m sure I’m not the first to come up with it, but I don’t recall having seen it elsewhere.)

Take verses from the Bible and replace “God” (or “the Lord”) with “Zeus”. If you have forgotten your ancient Greek mythology, Zeus was the BIG god, the main guy, the head honcho and Gran Queso. (That’s “Big Cheese” for the uninitiated, or “uninicianado”.) At least, he was after he overthrew his father, Cronus. But I digress. Let’s play!

“In the beginning was the Word, and the Word was with Zeus, and the Word was Zeus.” ~ John 1:1 (This is actually one of my favorite verses, and I like to replace “Word” with “Thought”, because thought is energy and isn’t that where it all begins? But that’s another blog post.)

“For it is by grace you have been saved, through faith – and this is not from yourselves, it is the gift of Zeus.” ~ Ephesians 2:8

“Zeus is gracious and compassionate, slow to anger and rich in love.” ~  Psalm 145:8 (Not judgy and wrathful, yes, I know, but it still works.)

Do you think the ancient Greeks were any less serious about their religion than many people of today? I know that I tend to think of mythology as silly and I can hardly imagine someone actually believing that it was true. But people did.

What do you think? Can you give me some verses that will give us a giggle, at least? Can you expand on this idea? Leave your thoughts and scriptures in the comments below.