The Ghost of the Union Captain 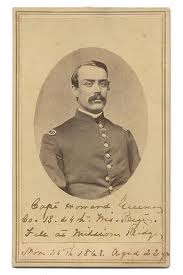 Welcome to my ghost story.  For a medium, I don’t have a lot of experience with earth-bound spirits or ghosts.  Most of my conversations with spirits are with those on the Other Side.  But each time I encounter a ghost, I learn a little more about how they operate.  This story is about the first time I met one.  (That I am aware of…)

I was touring a real Southern plantation in Louisiana a few years ago.  It had been developed in the late 1700s, and had been owned by the same family through all those generations until shortly before I went to tour it.  In the year or so before, the family had donated the remaining assets to the National Parks Department, so our tour guide was a park ranger.

We toured most of the buildings on the property, and wound up in the main house.  It wasn’t all that big, for what you would think of a major plantation, one that was a working farm for over 200 years, complete with its own store, blacksmith, etc.  The house had been updated with electricity and running water, of course, because it was occupied by family members continuously.  And the kitchen had been “decorated”, to use the term loosely, in a 1970s style.  Most of the furniture had been removed while the Parks Department restored the house.

The ranger guided us into a side room and told us about the use of that room.  It had three doors, two interior and one exterior.  I was standing near a wall between the two interior doors, when I felt someone walk up behind me, over my left shoulder.  You know how it feels when someone walks up behind you, right?  You can feel an energy there.

I glanced over my shoulder.  There were about 20 people on the tour, so I just glanced to see who it was.  There was no one there.  Someone came through the door about 12 feet behind me, and I turned back to the ranger.  But I still felt someone there, so I looked again.  Still no one.

So I asked in my mind, “Hello, who’s there?”  And I immediately got an image of an old photograph.  It featured a Captain from the Union Army of the Civil War.  And I knew that’s who was standing behind me.  But he was a Yankee…?

I asked him to tell me more, and he said he was actually a gentleman, not a career military man, and he was doing his duty in the war.  He indicated that he returned to this plantation after the war and lived out his life there.  I assumed, although I don’t think he told me this, that he returned for a woman and probably married her.

The tour continued, and we found ourselves in the main living room.  A man in the tour group spoke up and said he was related to the family that owned the plantation.  He said his grandmother had grown up in this very house and had been married in this very living room.

He told us that, during the Civil War, the Yankees burned the plantation down the road, but they occupied this house and spared the property.  I asked, “So there were Yankees in the house?”  And he said, yes.

That part was pretty cool, but I was still kind of wondering what this meant, and if I really had a ghost with me or… was this an encounter with a spirit who has crossed over?  I talk to those energies often, but this one came with that presence over my left shoulder.

As the ranger led us out of the house and onto the porch, I noticed that the energy left me, just as I crossed the threshold, as if the ghost couldn’t cross it.  Later, I talked to someone with a lot of experience with ghosts and he said that was definitely a ghost and his behavior was typical.

Well, how about that?