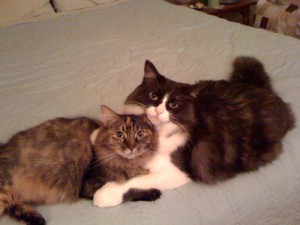 A couple of days before Jeannie’s reading, I woke up with a name from a T.S. Elliot poem in my head.  I was taking a shower, and I kept hearing, “Rum-Tum-Tugger”.  I barely know anything about Elliot’s work, but had read some of the cat poems in high school.  I saw “Cats” inLondon in 1983, but that was probably the last time I had encountered Rum-Tum-Tugger.  In fact, I didn’t even recall that it was in the show.

Fast forward to Jeannie’s reading.  I had only had about a minute for my pre-reading meditation, so I had not even gotten any contacts from the Other Side.  As soon as I opened up, three people popped up, 1-2-3.  One was the spokesperson, but none of them took on a gender or even an appearance for me.

I told Jeannie that Number 1 called itself “Teacher”, Number 2 “Brother” (passed under age 20) and Number 3 “Toddler” (shown with a high chair).  Jeannie confirmed that she had a cousin who passed at age 2, a boy who drowned when Jeannie was 10.

“Brother” turned out to be Jeannie’s uncle, her mother’s brother, who died in his teens.  I asked if he also had drowned, because I was getting water associated with his death.  She said no, it was a car accident, but she didn’t know details.  I suggested that she ask about water, and told her that he wanted her mother to know that he was okay, that his death was not a struggle and it was all right.  I felt that there were question marks around his death, but he said that those questions did not need to be asked, that it happened as it had appeared.

It turned out that she didn’t need to tell her mother, because her mother had already passed.  I went back to the spokesperson and I felt that it was a “he”, a teacher, someone older when he passed, a resource who may not have been related to her, who always had answers and plans.  Jeannie thought it might be a friend of her family whom she hadn’t seen in a long time.

And then came the bombshell:  I said, “I don’t know about this, it’s weird, but it was a T.S. Elliot poem that was stuck in my head the other day.”

Jeannie gasped.  “What is it?”

The two of us delighted in her mother’s contact for several minutes.  Even I couldn’t get over the clarity!  Her mother had been contacting me for over two days before the reading!  Clear as a bell!  I don’t think Jeannie could have asked for a better message from her mother.  And I certainly could not have!