One of My Spooky Stories 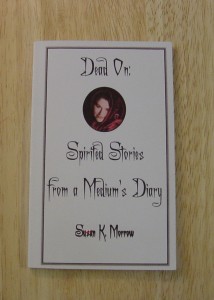 [This is an excerpt from one of my books, Dead On: Spirited Stories from a Medium’s Diary.  It is still available here in its original edition, and I am working on the second.]

During my pre-reading meditation, I saw a high-school boy in a football uniform, in a photo like the ones that all boys in sports take, posed on one knee with his helmet nearby.

Then I saw images of myself in front of an audience, then on the stage in the play “Oklahoma!” which I was in my senior year in high school.  One of the songs from “Oklahoma!” got stuck in my head.  It was “Many a New Day Will Dawn before I Do,” not one of the songs I usually sing from the show.  In it, a girl sings about having been jilted, saying it doesn’t bother her and that another boy will come along soon.

As soon as Andrew, arrived, I asked him if there was someone who played football who had died.  This was one of my many lessons about putting my interpretations on the images I see.  As I learned, the picture I saw was either Andrew or his brother, who played football in high school.  Both were alive and well, so I made a mental note:  a picture is not necessarily the spirit!  As it turned out, his grandpa was showing me something about Andrew’s life, that he had played football.

I told Andrew about my “Oklahoma!” references and asked if anyone had been on stage or in that play.  Or was there someone in Oklahoma or from Oklahoma?  What didOklahoma mean?  Andrew said, “Well, I had a potential client in Oklahoma.  The deal just fell through.”

Aha!  I asked him, “Are you telling yourself that it’s okay, it doesn’t bother you, and another better deal will come along?”  Of course, he was.

Another mental note—in bold italics—to tell the client exactly what I see and hear without running it through my filters first.

The person giving me the images was Andrew’s grandfather.  He was a pleasant and friendly man, but he kept interjecting into my chakra analysis.  The root chakra, rather than being a variation on a sphere (the way I see them), looked like an ocean wave, an image from the grandpa telling us about the family vacations he and Andrew took at the beach.  The navel chakra looked like a little girl pulling up her dress in front.  This baffled me—and made me giggle—until Andrew said that, when he was very little, his neighbors dressed him up in a dress.  Grandpa thought that was pretty darned funny.

I wondered aloud if I should stop the chakra reading, if Grandpa wanted the time, but he quieted down and let me finish that part of the reading.  Later, we had some more images of Andrew’s childhood.  This was one of the few readings in which I didn’t see the spirit, but only had images and feelings from him.  He was a genuinely kind and funny person and he let that come through clearly.