Merrill and the Hamburger Helper 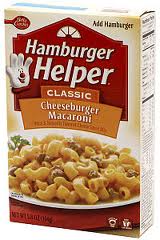 Merrill was in his 20’s when he passed away from complications from AIDS.  During his mother Dee’s reading, he came through easily and we talked quite a bit about his passing, because Dee had some question marks around the timing and the exact events of Merrill’s death.

Then Merrill had something for his sister.  He wouldn’t leave me alone until I told Dee, “Merrill is saying to tell his sister Susan to go ahead and make the Hamburger Helper.”  I explained that he seemed to be teasing and I asked if this meant anything to Dee.

She looked a bit puzzled.  “I don’t think they eat Hamburger Helper, maybe they used to when the kids were little, but I will tell her.”

About a week later, Dee called with the surprising event about “Hamburger Helper”.  It seemed that Susan and her husband were gourmet cooks and enjoyed food as an art more than simple sustenance.  Thus, the idea that Hamburger Helper would enter into their lives was at the very least a little unlikely.

When Dee talked to Susan after her reading with me, she said she felt that Merrill was urging her, “Tell her, Mama, tell her about the Hamburger Helper!”  So Dee gave Susan the message I had given her from her brother.

Susan said, “I have no idea what that means.  We haven’t even had that in the house for years!”

That evening, when Susan arrived home from work, she saw that her husband had been to the grocery store.  Sitting on the counter was a box of—you guessed it—Hamburger Helper!

And Susan’s husband didn’t even know why he had bought it.  “I don’t know, I just saw it and I bought it!”

Happily, Merrill has since become a familiar friend from the Other Side.  When I received a reading from a fellow medium, she said that many people from the Other Side were grateful to me, but there was one young man in particular who expressed gratitude for how I had helped his mother.