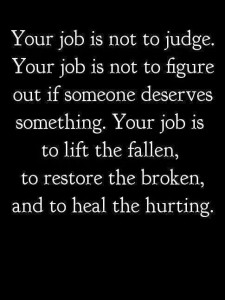 Ever been attacked? Bullied? Cyber-picked-on? Outright screamed at?

I recently got verbally crucified by a life-long friend. (And I rather doubt the friendship can survive.) For some reason, she posted a diatribe about what a terrible person I was as a comment on a Facebook post of mine. I don’t know what triggered her revelation of her apparently-long-held anger, but she let me have it. Hard. And it hurt.

I removed the post from Facebook and messaged her privately, apologizing for her pain and my contribution to it–which was, of course, innocent. I would never cause her pain on purpose. But I did so accidentally. And she turned it around, years later, to hurt me back.

My many apologies seemed to soften her anger slightly, but she did not forgive me. And she repeatedly described her own pain and anguish, of which I had been a part. She did not acknowledge my own horrific pain at the same time, nor do I think she is aware of it even now. And that makes me think she does not care.

Being excluded, ignored, or treated with apathy may be some of the worst pain in the world, especially when you are suffering from some of life’s hardest blows. Apathy serves to add insult to injury. But I did not defend myself to my friend, I only acknowledged her feelings and apologized again.

Now, this lady is by nature very sweet, one of the nicest people I have ever known. Her unkind behavior and downright cruelty toward me were extremely out of character. I believe that she has been “tutored” by someone to be angry with me. I only hold her accountable for being so ugly to me with absolutely no consideration for where I was coming from.

My response to her was to apologize repeatedly and to make mention of all of us having pain. She didn’t know, probably still does not know, how deeply she hurt me with her harsh words, words that accused me of being just an asshole, someone who doesn’t care at all, or even someone who would hurt another person on purpose.

As I am processing this incident–and it knocked me for a loop–I wrote up a little something on Facebook that I’d like to share with you here. It is for those who have been hurt, but it is also for those who do the hurting, intentional or not. And we all have been both.

Before you accuse someone, before you lash out in anger, before you even have a bad thought about someone, please try to put yourself in the other person’s shoes. Most people are not trying to hurt or offend you. Most of us are doing the best we can to get through every moment. Life isn’t always easy, but love is what makes it worth it.

Show some compassion today. Not just to one person, but to everyone.

Assume positive intent. Not everyone is being rude or mean on purpose.

Include the person who never goes. Maybe you’ve left her out, thinking she’s shy. Maybe she’s depressed. Maybe including her will do her a world of good that you can’t imagine. Maybe excluding her–again–will hurt her more deeply than you’ll ever know.

Some people get depressed and get treatment for it. Some don’t.
Many people who seek treatment for depression take a long time–years even–to get the right balance of treatment for them to feel okay.

Sometimes a depressed person seems grumpy, because that’s the best she can do to keep from crying in front of you. Or all the time. Sometimes “grumpy” is her M.O., because that’s how she manages to show up for work and tries to get through the day. Maybe it is taking every ounce of courage and energy she has just to get out of bed.

Be kind to someone who is poor. Being poor is not necessarily a reflection on how hard a person works or how willing a person is to work. You know the old saying, “If wealth were the inevitable result of hard work, every woman in Africa would be a millionaire.” And so would I.

There is no excuse for showing contempt for someone simply because he is poor. He’s not poor because he wants to be, or because he is trying to cause an affront to you. Nobody enjoys being poor, believe me.

Call your friend who has lost a loved one within the last year or two. Let them know you’re thinking about them and that you care. Grief is a pain that lessens over time but never goes away.