Update: The A&G’s Gave Me an Additional 2017 Theme 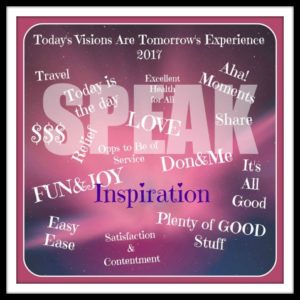 Well. I notice that, in the post I wrote just yesterday about this, I titled it “Theme/s for 2017”. I actually put it as a potential plural, even though I only had one theme for myself. And then, last night, the A&G’s* came through with a second theme for me! What?

I wanted to share this with you so that you will remain flexible in your theme. You might get more than one. Or you might get a new one in June! Pay attention to those, however they come in.

And here’s the story about my additional theme for 2017: SPEAK.

Last year, I went to a networking meeting–I haven’t been networking since I left Austin in 2010, so this was a treat. I loved meeting some new people and reconnecting with one of my best old networking buddies from Austin. She is a speaker. And she has a business that supports speakers. A couple of the other networkers at the meeting were speakers too.

Listening to my friend speak at the meeting, I remembered how much I used to enjoy public speaking. Even though my business card lists my title as “Psychic Medium * Author * Speaker“, it’s been a while since I did any real speaking. Oh, I’ve done plenty of Psychic Parties, where I am standing in front of a group and giving readings for them, but that’s a little different.

And I realized that I missed it.

I resolved then and there to get back into speaking. There are tons of groups who need speakers every week or every month. Rotary clubs, Lions’ clubs, BNI groups, Ladies Who Lunch groups, networking groups, associations, and the list goes on. I served on the board of Freelance Austin for two years as Programs Chair–and it was tough! It’s hard to get interesting speakers for your group, especially when you aren’t paying them anything.

Hold on. You might be wondering–who would speak to a group for free? And that’s a fair question. There are professional speakers who get paid hundreds or thousands or more to speak, and not only the famous ones you’ve heard of, like former politicians. Speaking is a profession unto itself. But I haven’t done that–yet.

What I do is speak to people about my work, about what Spirit is, about Heaven, about life, about philosophy, about my story… it depends on the audience.

And guess what. I have done exactly nothing about it since that networking meeting last year.

(Oh, and it is not lost on me about the other meanings of “speak”! Speak up, be heard, communicate, speak-it-into-being…)

So yesterday… here come the A&G’s, creeping up and whispering sweetly, “What about speaking, dear?” Yes. And I wrote down in my daily notes: “Do I need to change my theme?” Then I wrote as the A&G’s instructed: “Add a second one.”