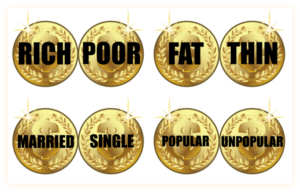 These four sets of coins show the things I have always wanted, backed with their opposites. Rich/poor, fat/thin, married/single, popular/unpopular.

You may have other coins, like employed/unemployed, healthy/sick, happy/depressed, even parent/childless. That last one can be a bit tricky to change spiritually, if you are having fertility problems, but everything is energy, so let’s keep going.

I tend to think or believe that I haven’t had the “bright” sides, but that’s not true. For example, my angels guided me to see this: I’m married now—how did I manifest it or receive it? How did I activate it in my experience? I was single a very long time.

The first thing I realize is that I was focused on not being married for a long time. When my first husband died, I felt strongly that I needed to be married, so I got married right away. I quickly discovered that I would much rather be single than married to the wrong man. Divorced him, toute suite.

A year and a half later, I started dating a man whom I soon fell in love with. I wanted to marry him for the entire seven years that we dated, until he dumped me to marry someone else. (His main reason for not marrying me was that I was poor—one of my other coins. Hoo-boy.)

After he dumped me, I declared that I would never again want someone who didn’t want me—and that has served me well in several instances, including friendships. (Are you taking notes?)

I found that, apart from often not having enough money (because it can be hard for a woman to make a good living unless she is a doctor or lawyer or other professional), being single was fine. When I thought about it, I focused on the good things about it, like choosing whatever I wanted—on TV, to buy, to cook or not to cook, to go and do whatever—without having to consult or even consider someone, especially someone who was a terrible husband, like my second one.

I processed the hell out of my past romantic relationships, too, and learned all I could about myself, how I could behave differently, and what I wanted to give and share. And receive. By “processed”, I mean that I scrutinized incidents and conversations and arguments, all to see from my new objective point of view what I could have done differently to show the Universe that I loved and valued myself, not only him. (More notes here.)

I made a couple of different lists of characteristics I wanted in a mate. I eventually tore up and threw away the first one and I posted the other one on Facebook. Not very long after the post, I met Don.

This is what my angels guided me through about the coins. The pairings are sides of one coin. You can’t be both at once, not rich and poor, for example. (Although you can be in between.)

I’ve always wanted to be rich, thin, married, and popular. But I am instead broke, fat, and unpopular—but now married!

Let’s take a look at popular/unpopular. When I was in junior high and high school, all I wanted was to be popular (and thin, but that’s a different coin—and I wasn’t even fat!). By the time I was a senior, I was probably what most people would consider popular: I had plenty of friends and a lot of people knew who I was. But I was never in the “popular crowd”, so I thought I was unpopular—or maybe “not popular”.

In the intervening years, I mostly have felt that I didn’t have enough friends—although I did feel popular for a couple of years when I led a large networking group in Austin. Also, I had a lot of work with my first business—I did not equate that with popularity, but I should have—but I have not had nearly enough clients since then. And in my life now, “popularity” equals “lots of clients”.

Popularity is still important in terms of clients and work. Those “likes” on my Facebook fan page are paramount. How does “Madame Not-Even-Any-Good Psychic” have 10,000 likes? I don’t know that answer any more now than I knew how someone became a cheerleader in high school. If I did, I would have bottled it by now and made a mint!

Speaking of unpopular, last year, two groups of friends dumped me—turned on me, even. One was my little clutch from late high school/college—the really tight besties. The other was a bunch of childhood friends who had always been in my life. Both hurt.

I’ve known for some time that I always thought I was fat when I wasn’t. I was adorable when I was younger and thinner! (I am actually fat now. Even the doctor says so.) Most of us have this trouble, never thin enough, right? But I have been mostly in body-acceptance mode for about 10 years or so. That “fat thing” is so very deeply ingrained in Western women, it’s hard to overcome. If I go by my “married coin”, my acceptance and even love for my fat body should do the trick, right? Well, as of this writing, I’m down ten pounds. Shrug.

Now, for the “rich/poor” coin. I have been comfortable (never “rich”) at times in my life, but I have mostly focused on the times of struggle, even discounting the prosperous times as exceptions, too few and far between. I’m not sure what the reality is, as I have been in the “poor” zone for a very long time now. I fear/ed poverty and struggle and not-enough-ness…

And maybe fear is the key. According to the Law of Attraction, what you focus on expands. Being afraid is one way of focusing your vibration. I was afraid of being single when Tim died, but not at all when I divorced Number Two. I came to embrace and even like being single, in large part because I knew how bad it was to be married to the wrong person. I don’t want to be single now only because I love Don and want to be with him. But I’m not afraid of being single.

Of course, with affirmations, we use positive words:

Next: What’s good or “to like” about being fat, poor, and unpopular? Maybe you can extrapolate these for your own coins.

Start off with embracing what is now and what you’ve got. While you are “haunted” by your fears of the “dark” side of your coin, your coins cannot change.

Appreciate moments that were what you like, if any. Remember a time you had that and enjoy the memories, being careful not to be resentful that those times are no more.

And finally, look forward to improvements, but don’t depend on them for your happiness. Let your happiness stand on its own, enjoying and giving thanks for what is here and now, remembering and cherishing the good things that used to be, and smiling at your imagination of the “bright” side of the coin that is coming.

And get ready—those coins can flip very quickly!