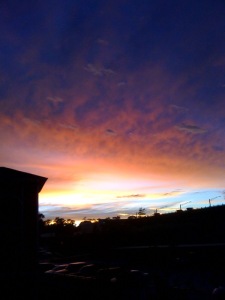 A sunset over Westview

There were only two streets in Westview, the subdivision where I grew up.  The longer street, Oak Hill, sometimes mistaken for “O’Kill”, where I lived, had two short cul-de-sacs extending from it.  We called the shorter street “up on the hill” due to the shallow hill between the ends of the two streets.  And it was a only longer cul-de-sac itself.

The cul-de-sacs all had actual islands in them, covered with brush and trees.  One of these was to the side of my  house, between my neighbor, Lisa, and me.  In the summer, Lisa’s dad, Mr. Cecil, also known on occasion as “Big Daddy”, would clear the brush from the cul-de-sac island and build a fire on it.  Then we’d have a weenie roast.

The neighbors would bring hot dogs and all the fixin’s, along with marshmallows, and unfolded wire coat hangers to impale the morsels and hold them over the fire until they were either done and tasty or burnt and nasty.  And there were always S’mores for dessert.  That was the point of the marshmallows.  I didn’t and still don’t eat marshmallows otherwise.

The grown-ups brought their lawn chairs and cigarettes, and talked and laughed and drank beer into the wee hours.  Sometimes a kid would ask for a puff of a cigarette—my mom answered an angry and disgusted “No!” the one and only time I asked, but some moms or dads said yes.

The kids rode around on our bikes, harassed the adults and each other, swatted mosquitoes, sat in the grass, played chase or tag or Swingin’ Statue, and ate whatever we were fed.  If your mom was the kind of mom who insisted on dousing you with Off!, you’d go home smelly but relatively unscathed.  If not, you’d be all bitten up.  I was one of the smelly ones.

Pleasant was only a couple-hours’ drive from Louisiana, with a similar climate (hot and humid) and similar mosquitoes (large and plentiful).

Back then, nobody knew the dangers of DDT—or if they did, they weren’t tellin’ yet.  So every now and then, the “fog man” would come around, a big truck that put out a mist of DDT all over town, to reduce the mosquito population and spare us all the slow, miserable death of sleeping sickness.  Or malaria.  Or something equally insidious. I was never really clear on that.

We kids would hear the truck coming and we’d run outside to meet it.  We’d run behind the truck for as long as we could—until our lungs gave out.  I don’t remember feeling sick or anything, but I do remember the smell.  It was a petroleum-type smell, like an aromatic solvent.  It must have been what made the fog.

Was that only one summer?  Or two?  Maybe the DDT has stolen that memory.  At some point, our parents caught wise.  They found out that DDT was dangerous and we had to stop our eager meetings with the fog man and stay indoors when he came around.  Parents could be such downers.

On many a Fourth of July, we kids would decorate our bikes with streamers and have a bike parade for the enthusiastic adults.  We’d start at the top of the hill and ride down, turning the corner onto my street, and flying past all the houses.  Woohoo!  The adults would cheer and after dark, someone would shoot off fireworks.  There may have been a law against it, but no sheriff’s deputy would have made any fuss.  Mr. Cecil worked for the FAA as an air traffic controller, plus he ran for mayor once.  My daddy had been in charge of the Chamber of Commerce, and then he was a banker.  Nobody would mess with them, I was sure.

Sometimes, a neighbor—or my parents—would give a party.  It was during the 1960s and 1970s and cocktail parties were the big thing.  My parents must have gone to a cocktail party or given one every month, maybe more.

Once, Mother gave a “poverty party”.  She created a little verse for the invitations and hand-wrote it onto brown paper sacks, which she then delivered to the guests.  She drew profiles of a hillbilly man and woman, and hung them on either side of the powder room.  My mom is really creative and good at drawing and fashion and all kinds of stuff.  She was also bored a lot in those days, being way too smart and inquisitive to be a stay-at-home mom (which she was also really good at).  I’m not sure what she wore to the party, but I remember she tied a scarf around her head and went barefoot.  She served beans and “corn pone” and copious quaffs of moonshine in fruit jars.  Two couples showed up in tuxedos, evening gowns, and furs, claiming those were their worst duds and only choices for attire.  I recall the party being a massive hit with the cocktail crowd, which I only caught glimpses of as I padded into the kitchen for a drink of water before bed.

Another time, a relative of actor Kevin Bacon got married in our back yard.  Kevin wasn’t there, but the food was great and my mother was definitely the hostess with the mostest.  And this provided me a lifetime of bragging that I am a mere two degrees of separation from Kevin.

I loved the smells of my mom’s preparations for a party or a “banquet”, a mysterious event that I believed had something to do with a band, as in “band-quit”.  Now that I think about it, that’s probably because my mom pronounced it and still pronounces it “ban-quet”, with a short “a”, as in “fan”.  I probably added a “d” as I tried to understand what was what.

My mom had big hair for a while, like the ladies wore in those days, like some ladies in Texas still do—and she used a lot of hairspray.  She also would put on perfume when she and my dad were going out, and she always wore lovely things, like glittery hostess pajamas, or a slinky mini-dress with sparkling stockings.  Yes, stockings, as in “with a garter belt”.  My mom was beautiful and she smelled good.  When she got home, the perfume and hairspray had blended with cigarette smoke and the smell of whatever cocktails she had consumed.

“Come and kiss me when you come home!” I always begged before they left me and my sister with the sitter.

And when she wafted in late at night, I’d peer sleepily at her enormous coif and glittering clothes, smelling those happy party aromas, and I’d think she must be the most glamorous and sexy woman ever.  And I knew that, someday when I was a lady, I would tease my hair and put on my stockings and garter belt, and I’d go hear a band play at the band-quit.