Heave to the West 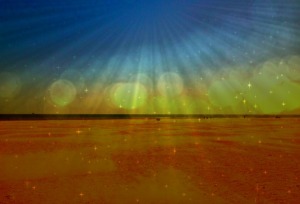 Growing up just 90 miles from Galveston gave me regular beachly visits.  Every summer, we’d rent a beach house with several other families and spend a week or two down there.  There would also be shorter jaunts, even day trips to the beach, and I fell in love with Galveston when I was just a little girl.

Truth be told, the beaches there are not that great.  The clockwise-swirling Gulf Stream brings silt and grossness from the Mississippi Delta, so the beaches are brown, and the water is usually brown too.  Sometimes, you’ll see an emerald green in the water off shore.  And right up at the tide line, the water is transparent, but there’s a lot of mud in that water.  Jellyfish abound in August, when the wind comes off the land and you get eaten alive by mosquitoes.  And if there’s an oil spill in the Gulf, it does make for tar on the beach.

But the surf is usually gentle, and the sand is great for digging and playing and building castles.  And oh, by the way, it’s the fucking beach.  Get over yourself, Cozumel.

Galveston has a number of added attractions.  These days, there’s a Schlitterbahn, Moody Gardens, the hurricane museum (the island was wiped out by a massive storm in 1900), and more.  But back in the olden days, there were a few points of historical interest, like the Bishop’s Palace.  And you could get fresh shrimp and crab that were swimming in the Gulf minutes before.  It was a dreamy vacation every year.

For several of those years, our neighbors, Miss Marcia and Mr. Don, were able to get a big beach house on Bolivar for us.  Bolivar is a peninsula that almost meets Galveston on the east end, and there’s a ferry to get over there.  The ferry alone was a huge point of excitement when heading to our vacation destination.  We often were accompanied by porpoises in the bay, which was fun enough, even without my family’s incessant punning, such as “You did that on porpoise.”

Mr. Don was the Episcopal priest in Pleasant and the diocese owned the beach house: it was a really big one with swinging beds!  I assume there were such things on ships, and this house was equipped with two or three of them, hung on four chains from the ceiling.  They were absolute bliss to sleep on, right in the front room, surrounded by screen walls, like sleeping right on the beach, but without mosquitoes or the threat of the tide—or the mosquitoes—carrying you off.

There was a small living area, with a pass-through bar into the kitchen, and I remember gathering there sometimes—must have been during a rain, because we were usually out on the beach or the deck.  The daily routine was:  up early, eat a bowl of Cheerios (a cereal which to this day takes me back to those days on Bolivar, since we always had bacon and eggs at home), and hit the beach before the sun got too high.  My mom made cover-ups for me and my sister from two hand towels pinned together at the shoulder, but we didn’t have any sunscreen back then.  We only had suntan lotion, so we had to head inside in the middle of the day.  From 11:00 a.m. until about 3:00 or 4:00 p.m., we had to amuse ourselves indoors.  I guess we played games, read, and napped.  That part I don’t even remember.  We must have had some boredom, but my memories only include the happiest.  In the afternoon, we were back out in the water, swimming, collecting seashells, building sand castles.  It was Norman Rockwell at its finest.

Mr. Don played guitar and sang, so we had sing-alongs every night.  My sister and I already knew some good camp songs, but we learned drinking songs from Mr. Don.  Like the one about the Titanic that goes, “…it was sad when the great ship went down—to the bottom of the—husbands and wives, little bitty children lost their lives…”  And one about the Leland Stanford, Jr. farm, which I didn’t get at all.  Oh, and the best one of all was the Fishy song.  “Oh, I wish I were a fithy in the thea, in the thea…”  I’ve taught them to my children and we all love to sing them still.

I remember going crabbing only one time.  We uncurled a long net and waded into the water, unrolling it in a horseshoe shape, so that we created a corral between us and the shore.  We hooked our toes into the bottom of the net and held the top edge up, mine under my chin, because I was still small.  Then we walked our net-holdin’ toes toward the shore.  Et voila!  A net full of crabs, which promptly went into the big stock pot back at the beach house.  That’s still exciting to think about.  I haven’t had crab that fresh since.

I only got stung by a jellyfish once, and I think it was a really small man-o’-war.  It swam between my thighs and its tentacles raised welts on me as they brushed my skin.  I remember sitting on the beach and patting wet sand onto the blisters like a poultice.  It wasn’t that bad.  We always took meat tenderizer to the beach for such injuries, but I didn’t need it.

One night on Bolivar, when I was asleep along with the other younger kids, and the grown-ups were sitting on the beach around a fire and drinking beer and cocktails till Kingdom Come, granting surreptitious sips of beer to the older kids, a shrimper ran aground on a sandbar just down the beach.

All of our three-sheets-to-the-wind group ran down to “help”, if you can imagine.  They ran into the water and swam to the sandbar, urging the boat to move off and into deeper water.  Some strangers appeared too, and a buxom blonde woman wrapped her legs around Mr. Don’s waist, as some of them grabbed the tow rope and tried harder to budge the grounded ship.  My mother says she can remember the feeling of holding that rope and bobbing about in 10-foot swells, knowing full well, even in her stupor, that they were not ever going to get that damned boat off the sandbar.

The frantic skipper yelled, “Get away from my boat!  Get away from here, you stupid drunks!”  And all the while, the blonde woman hanging onto Mr. Don kept shouting, “Heeeave to the west!”

Post-script:  My mom and I recently decided we want to buy a beach house.  We’re going to name it “Heave to the West”.