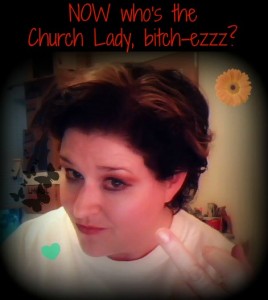 So I am just going to rant on about some stuff that is stuck in my craw. Maybe tomorrow, I’ll return to rational. But then again, maybe I won’t. [Judy Blume]

I’ve always been kind of nerdy, kind of a goody-two-shoes, with a few exceptions which are totally negligible. I’ve always been stylish, but not trend-setting or funky, usually.

I am extremely smart, smarter than most people I meet (and it took me years to recognize that, but that’s another story). Maybe that shows, maybe not. I remember one young man telling me, after a “deep” conversation (as deep as an 18-year-old boy can go, no pun intended), that he was glad we talked, because he thought I was–ahem–“an airhead”.

I am many things, but stupid ain’t one of ’em. I have never forgiven him. For over 30 years. Yeah, sure, grow up, smart, nerdy goody-two-shoes. What-the-fuck-ever.

It has been revealed to me in various ways by a number of people over the years that I appear “Christian”, “religious”, “prim and proper”. Puh-lease. Again, I am many things…

I am not religious.

Spiritual, oh, hell, yeah. I got spiritual going ON. (Not hip. I know. Too bad.)

And why does it offend me? Because “Christian” so often means:

And finally, I don’t like being labeled. Call me smart, call me bookish, call me psychic, call me annoying (I’ll own that!), call me late to dinner, but don’t fucking call me religious.

End of rant until next time…