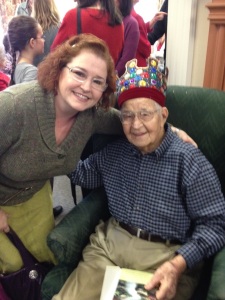 This past December found me and many of my relatives traveling to East Texas–a beautiful drive even on that cloudy day–to celebrate his One Century of Life!

I called Granddaddy on his actual birthday and he told me, “I don’t feel like I’m 100.  Of course, I don’t know what it feels like to be 100, so maybe it feels like this!”  And maybe it does.

Do you ever wonder about longevity?  Do you WANT to live for a long time?  I think we can all agree that living a long time is great if you are healthy and happy.  My granddaddy is both, even though he has slowed down a lot, but only in the last couple of years.  He was getting out of his car a couple of years ago and fell and broke his leg.  This was a good opportunity for the family to help him quit driving.  Yes, folks, he was still driving at 98!

How has he done it?  Well, I guarantee you he doesn’t know a thing about the Law of Attraction–at least, not in so many words.  But he has lived his life with three things:

I’ve never known anyone as positive and hard-working as Granddaddy.  He not only worked his butt off as a butcher, but he always had other projects going, as well, such as working on cars, building an old Model A Ford from the ground-up, running his own meat market, and making violins.  He kept his hands and his mind busy all the time.  And all along the way, he completely  adored my grandmother.  They were married longer than 70 years until her death in 2009.

You might think that, coming from a family of 12 children, dirt poor, and having few opportunities, my granddaddy might find that a good attitude would be hard to come by.  Some of his siblings had harder lives, divorces, addictions, struggles, etc.  But he has something special, and his attitude has always been as strong as his giant, hard-working hands.

When I think about his life, I don’t think he has missed much.  He never had the opportunity to go to college, even though he had the smarts.  He was always grateful for any opportunity he got, and he made the most of them.  When World War II started, he wasn’t eligible for the service, so he moved his family to Ft. Worth, where he worked in an airplane factory, building planes for the war effort.  While there, his superiors discovered his natural aptitude for drafting, so he designed airplane parts and taught others how to do the same.

I wish you could hear him tell the stories I have heard.  What a remarkable man!

Did he miss anything?  I couldn’t say for sure, but I know he has never said a word to me about any regrets.  Maybe that’s where I got my no-regret policy for my own life.  Guilt and regret are wastes of my precious energy, and I’m grateful for a grandfather who, by his bold example, taught me that.

Now, I’m guessing that most people reading this have not reached such a ripe old age as Granddaddy.  But take a moment to think about getting close to the end of this life – would you have regrets?  Would you have missed anything?  Could you claim a great attitude, a solid work ethic, and a lot of love?  If not, what changes can you make right now, so that when you look back, you’ll see a life of no regrets?